“It matters very little to me what you, or any man, thinks of me – I don’t even value my opinion of myself. For I might be quite ignorant of any fault in myself – but that doesn’t justify me before God. My only true judge is the Lord.

The moral of this is that we should make no hasty or premature judgments. When the Lord comes he will bring into the light of the day all that at present is hidden from darkness, and he will expose the secret motives of men’s hearts. Then shall God himself give each man his share of praise.” – First Corinth 4:3-5 (J.B. Phillips)

Many of the culture war salvos of the past week have been launched in response to evangelical pastor Louie Giglio’s withdrawal from president Barack Obama’s inauguration. Giglio, who heads Passion City Church in Atlanta, stepped down after liberal activist website Think Progress posted a link to a mid-1990s sermon with some less-than-flattering statements about homosexuality.

Did this have to happen? Was this a case of the president appointing a bigot or censorship of conscience?

Obama ruffled a lot of progressive feathers four years ago when Baptist megachurch pastor Rick Warren gave the inaugural invocation. This was before the repeal of Don’t Ask, Don’t Tell and Obama’s decision to stop enforcing the Defense of Marriage Act, so at the LGBT community and straight allies felt betrayed by the man whom they had helped elect. 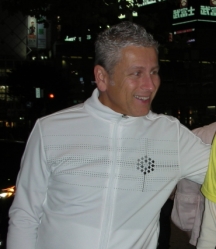 The real controversy is that shirt. Zippers are soooo 2010.

But Louie Giglio is not Rick Warren. During the 2008 election season, Warren announced his support of California’s notorious Proposition 8, a ballot initiative that banned same-sex marriage in the state. Though he recently tried to take a mulligan on the issue, Warren’s name, along with the Catholic and Mormon churches, has been associated with the legislation. As a pastor of a huge congregation and author of the immensely popular book, A Purpose-Driven Life, Warren’s word carried a lot of weight among evangelical voters.

Giglio, on the other hand, gave this sermon a decade and a half ago when he was a relative unknown. He has not been very vocal on the issue since, either from the pulpit or with the pundits. Nor has he made any push for legislation regarding LGBT issues. He is better known for his electrifying sermons and the $3.3 million that his church has raised towards combating human trafficking.

So the deeper question to emerge from this is whether gay marriage is a litmus test for giving an invocation at a public event. And is that a good thing?

Look at it this way. If you wanted to find a liberal priest who does not believe homosexuality is a sin to perform your wedding or your child’s baptism, you would have to do a lot of searching. Most likely, you would ask your favorite parish priest to perform the ceremony regardless of his position.

Jesus teaches us not to demonize others. We as progressive Christians believe that Giglio’s belief regarding homosexuality is an error. But errors can be corrected.

“But I say to all of you who will listen to me: love your enemies, do good to those who hate you, bless those who curse you, and pray for those who treat you badly.” – St. Luke 6:27-28 (J.B. Phillips)

Perhaps LGBT advocates would do better to reach out to Giglio and others like him. Demonstrate that the only “gay agenda” is that of civil rights. An exhibition of Christ’s love could have led to a much different resolution of this issue. Instead, this has put a bad taste in the mouths of conservatives, reaffirming their belief in the “gay agenda,” though the agenda involved here was that of the Center for American Progress. And it raises the issue of public censorship.

What do you think, dear reader?

Note post: If I were unfortunate enough to be elected president, I would ask my parish pastor to perform the invocation, similar to Obama’s selection of his backup. Not only does that make it more personal, but it’s easy to justify. To be fair, though, Obama did not have that option in 2008, the result of a different controversy.

1 thought on “When does the bad outweigh the good? (Gettin’ Giglio with it)”