At the Call To Action conference a few weeks ago, there was a point at which Garry Wills threw a question out from the main stage that felt like an old-school litmus test of who among us was still “really” Catholic. The question was: 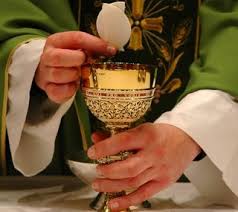 Surprisingly few hands went up. Mine was among them. Sort of. I wanted to ask, Can you restate the question?

The transubstantiation is a lot to chew on–pun intended–and I’m not sure I’ll ever totally come to terms with it. But here’s the thing: I do truly believe that the bread and the wine become Jesus’ body and blood when the Eucharist is performed within a community that also holds this interpretation sacred. That means that I believe it happens when I go to Mass at recognized Catholic churches, and when I go to Masses performed by Womenpriests or others ordained in a Catholic tradition. But I don’t believe the transubstantiation happens any ol’ time communion takes place at a church. For churches that believe the Eucharist is purely symbolic, I feel certain that it is–in those churches.

I don’t think one of these is better than the other, but my spirituality hungers for both. My spirituality hungers for the symbolic act of sharing a meal together, as Jesus did with his friends, the way I take communion at the UCC church I belong to. But when I find myself homesick for the Catholic Church, it’s this mystical experience of the Eucharist that I crave; and my senses are alive to it in a way now that they never were when I attended Catholic services every week. I do believe, and it matters to me. But it doesn’t matter to everyone, even many of my fellow Catholics, and I’m okay with that, too. Because I think we miss the point if we force the Eucharist to be one thing or another.

Transubstantiation is, at its heart, transformation. And whenever something transforms, something of what it once was remains. There’s still a caterpillar inside every butterfly. There are still eggs and flour and sugar inside a cake, even after it’s become something that is greater than its individual ingredients. There is still a Catholic inside me even though I now belong to a non-Catholic Church.

Part of the richness in the Catholic Church is that it lets us hold onto this mystery. It says it’s okay that some things are just beyond our understanding. The Trinity. The transubstantiation. Life after death.

But where it falls short is in not allowing us to embrace these dualities within ourselves. I know there are many who would not consider me Catholic anymore. But there’s still something Catholic going on if I can’t give up the transubstantiation. I put off joining my new church for almost two years because I was so afraid it would mean that I had to stop being Catholic. Then I really sat down and studied the new member materials the church had sent. And I saw that we could become “associate members” of the church–which meant we were joining while also holding allegiance with another faith tradition/church simultaneously. The church version of dual citizenship.

I joined because I knew a church that could acknowledge multiple dimensions of my spirituality was one that I wanted to be a part of. That’s not to say I don’t still struggle with the pull between different aspects of my faith life — I do. I practice in a primarily UCC way while Catholicism still infuses most of my private spirituality. But in those moments, I remind myself that my soul is big enough for both. The Eucharist is big enough for both body and blood and bread and wine, at the same time. And God is big enough for it all, the pieces that make sense and the pieces that don’t, and so much more besides.

15 thoughts on “On the Transubstantiation … and Other Things”