Last Sunday, September 14, was the feast of the Exaltation of the Holy Cross. Since then, I have considered the many kinds of crosses there are. I mean literal crosses, those you wear around your neck or affix to your wall.

Crosses can be streamlined and blank. For Protestants, this is generally the default. Originally, all Christian crosses were this way. Writes Thomas Cahill in Desire of the Everlasting Hills: The World Before and After Jesus:

The early Christians, the original friends of Jesus, so sympathized with Jesus’ pain and had been so traumatized by it that they could not bring themselves to depict the stark reality of his suffering, except in words–that is, in the accounts of the four gospels, which are as clipped and precise as the four authors knew how to make them. Only in the fifth century, nearly a century after the Roman state had discontinued the practice of crucifixion and no one living had witnessed such a procedure, did Christians forget the shame and horror of the event sufficiently to begin to make pictures of it.

Of course, crosses also include those body-bearing crucifixes that are so familiar to us Catholics. But they need not be dead bodies. On some crosses, Jesus is not hanging in execution, but risen in glory.

I keep a cross from El Salvador in my bedroom. Colorful birds and animals surround a smiling, post-Resurrection Jesus. Green hills and lush foliage burst forth. The banner near his head does not read INRI, for “Jesus of Nazareth, king of the Jews.” It reads la nueva creacion, for “the new creation.”

I think of another crucifix variant that I picked up about ten years ago. I was a janitor at my church. We were throwing out boxes of random, unclaimed religious bric-a-brac. I found a tacky plastic cross that showed Jesus fully vested as a Roman Catholic priest. He wore a white alb and red chasuble and red stole.

I understood the iconographic reference to the Letter to the Hebrews. There, Christ is the great high priest who has passed through the heavens. But this cross also exhibited a kind of ultimate clericalism. Blood, salvation, power, and your local Father Whozit were all rolled up into one. I kept it as a curiosity item. However, I never did hang it anywhere. 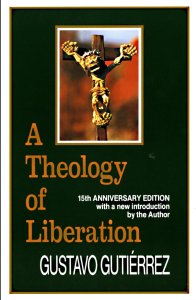 Crucifixes with the classic dead Jesus can seem morbid and oppressive. But some such crucifixes, even very graphic ones, can be subversive and liberating. See the classic cover of Gustavo Gutierrez’s A Theology of Liberation, with its photo of a cross by Peruvian sculptor Edilberto Merida.

The corpus suggests an indigenous Jesus who suffers in solidarity with the local people. This Jesus does not rule in cahoots with their colonizers and overlords. Nor with yours.

Crosses can be elongated Latin crosses, which look more like the historic execution devices and lend themselves to that imagery. Or they can be square Greek crosses, which draw from their own artistic and symbolic universe. At Mass last Sunday, I wore a traditional Byzantine phos zoe cross, inset with the Greek words for light (phos) and life (zoe).

Different crosses convey different messages from different messengers. The part of my soul that is medieval and Latin-speaking appreciates the duende of a bloody, thorn-crowned crucifix. But I also know that when I see such crosses, and when I am among people who pointedly favor such imagery, I am receiving an instruction: “Feel guilty. You did this to Jesus. Your disobedience and dirty thoughts made him bleed. Now obey his duly-appointed authorities.”

And when I see other types of crosses, those that have more phos et zoe, I absorb something else entirely. In his book The Pope’s War, Matthew Fox quotes former Jesuit Michael Walsh, who puts it well: “It is, I firmly believe, a basic tenet of Christianity that faith in Jesus Christ should be a liberating force in people’s lives, that it should free them to become more themselves, more in charge of their own destinies.”