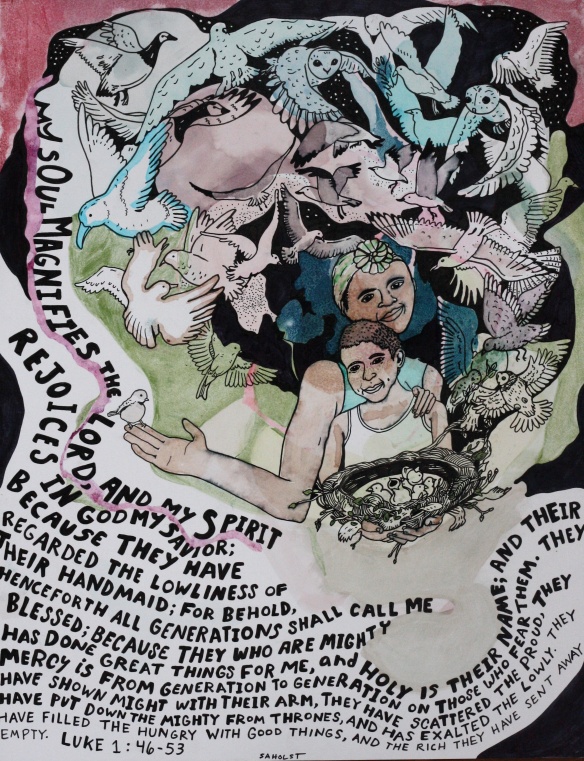 This is a reflection by YAC Blog Editor Sarah Holst that originally appeared on radicaldiscipleship.net as a part of their monthly Bad-Ass Biblical Women series. If you would like to contribute to the series, email lydiaiwk@gmail.com.
Last year at National Call to Action I attended a workshop led by Onleilove Alston on her work uncovering and uplifting the Black Presence in the Bible.  She spoke about the Black Madonna and the importance of reading Mary of Nazareth in the context of her economic, political and cultural setting: a very young woman with brown skin, turned-out, looked-over, and, as poet Kathleen Norris puts it, “capable of walking the hill country of Judea and giving birth in a barn.”  This is the historical Mary that was called to participate in liberation and redemption, smuggling God into the world inside of her body.
Onleilove challenged those who participated in her workshop, “To be relevant, we need to be accurate… The Magnificat is a poor woman’s song of resistance: and she sang it for HERSELF.”  Meaning, take note of the Marys who are singing, study them, practice an ethic of accompaniment with them.  I have been witnessing this in the Lake Superior Watershed with a group of women of color called Meeting of the Mothers who are rising up against the School to Prison Pipeline and singing their own song of liberation.  These women are fighting for their lives, for their children’s lives, in a system that would make them targets.
As a cradle-Catholic with an affinity towards Mary of Nazareth, I have realized that taking seriously Mary’s story means walking alongside those who are like her in the nearest of ways.  In Lake Superior Magnificat, a flurry of the Holy Spirit (made alive in seagulls, owls, and hawks) rises as Black Mary and her Holy Son refuse to stand down but rather hold a nest that is letting fly new possibilities, and the words of the Meeting of the Mothers are heard on their wings, “Since Mama was broke and had to redo from the ground up, there is nothing anyone can do to break my children.”