This is a post by current Young Adult Catholics blog editor, Sarah Holst. Sarah is a Masters of Divinity student and artist living in Duluth, MN.  She plans to be ordained a Roman Catholic Women Priest and start a survivor-centric, watershed discipleship church community.  Sarah is active in racial justice work in Duluth.

Yesterday at dawn, my partner Nathan Holst left with a group from Duluth’s All Nations Indigenous Center to bring supplies and support to the Sacred Stone Camp and Red Warrior Camp on the Standing Rock Reservation.  Over 5,000 indigenous people representing over 100 tribal groups have gathered at the camp in protest of the Dakota Access Pipeline, which not only threatens Standing Rock cultural and burial sites, but could possibly affect all people, farmers and ranchers that rely on the Missouri River for clean water.  This is a historic event, the first time the Seven Fires Sioux Nations have come together since Little Bighorn.  Even historical enemies, like the Crow Nation (which I am connected to), brought gifts and joined hands in the effort to stand for Treaty Rights and protect the land and the water.  This is a gathering both created and sustained on prayer.  Many believe that it is a fulfillment of the White Buffalo Prophecy.

I could have gone along, but opted to stay in Duluth so to not to miss the first week of classes.  Thus, I found myself in the position of reading Abraham Heschel’s The Prophets and receiving notice that things at the Red Warrior Camp had escalated. 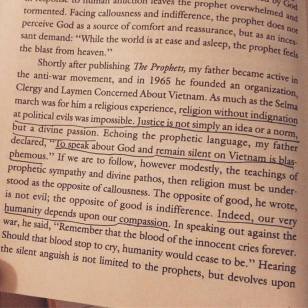 “To speak about God and remain silent on [Standing Rock] is blasphemous.”  “Few are guilty, but all are responsible.” -Abraham Heschel

The company behind the pipeline, Dakota Access LLC, had skirted the protestors’ camp and started “preparatory work” on another tract of land without completing standard procedures such as Environmental Impact Statements.  The company steamrolled through sacred burial sites.  When the Water Protectors heard of this, they ran out and bravely put their bodies in front of the bulldozers.  Private security officers, hired by Dakota Access LLC, were there and intimidated protestors with pepper spray and dogs.  Several people were bitten, including a pregnant woman and a young girl.  (You can watch Democracy Now’s coverage of the event here.) Nathan and the rest of the group from Duluth were fine.  I, at home at my desk, was outraged.

Subsequent mainstream media coverage of the event has called the protestors violent and blamed them for injuries sustained by Dakota Access workers and security officers.  While I am not surprised at this historically cruel and deliberate flipping of the script, I want to examine where violence and justice really lie in this story.  I am so thankful for social media because, unlike in our textbooks, the voices of Native Americans on the ground are prolific and available.  We have to, have to listen to those voices.  Our humanity, the integrity of our faith, is on the line.

Friends, if we are to say we are working for justice in our church and world, if we are to take seriously the call of our faith to care for other creatures and the land, if we are to be disciples of Laudato Si, if we are to unearth and claim the deep thread of the Old Testament that ties our well-being with the flourishing of the places that sustain us, then we must be in solidarity with Standing Rock.  If the Dakota Access Pipeline is built, then fossil fuel use will continue full-throttle and climate change and chaos for those on the margins will ensue.  (It already has.)  We cannot, yet again, leave communities of color to do the dirty work by themselves.  The fight at Standing Rock effects all of us, and I would argue that it is at the heart of what we are called to as people of faith.

Let’s talk a minute about violence.  The cycle of violence that reaches Indian Reservations in the United States is centuries-deep.  In fact, the only legacy colonialism, the Church, land theft, and years and years of terrible legal practices has left the indigenous in our country is violence.  All resilience and fortitude and thriving beyond odds has come from the indigenous communities. Dakota Access LLC is meeting the cumulative affect of that resistance.  I am sorry that officers and workers were injured yesterday, but to call the Water Protectors’ acts of cutting the fence, climbing on machinery, and self-defense “violence” without naming the violence of non-consensually ripping through sacred earth, endangering a whole population with water pollution, and non-discriminatorily ruining and erasing cultural and spiritual areas is evil.  (Not to mention unleashing dogs on peaceful protestors.)

LaDonna Bravebull Allard, the woman behind the gathering of Sacred Stone Camp said by not putting an end to the Dakota Access Pipeline:

“The U.S. government is wiping out our most important cultural and spiritual areas. And as it erases our footprint from the world, it erases us as a people. These sites must be protected, or our world will end, it is that simple. Our young people have a right to know who they are. They have a right to language, to culture, to tradition. The way they learn these things is through connection to our lands and our history.

If we allow an oil company to dig through and destroy our histories, our ancestors, our hearts and souls as a people, is that not genocide?”

Please friends, open your hearts, help usher in a great-renewal, the Kingdom of God, and put a stop to the thought-patterns that allow this to still be happening.  Learn about the indigenous people of your place, honor them as the traditional caretakers, join in the resistance wherever you are.

Art in the Minnesota State Capitol depicting attack dogs in the bottom left held at Lakota/Sioux people in the center.

10 ways you can help the Standing Rock Sioux fight the Dakota Access Pipeline:

1. Call North Dakota governor Jack Dalrymple at 701-328-2200. Tell him that the use of dogs and pepper spray against indigenous people is unacceptable.

2. Sign the petition to the White House to Stop DAPL:https://petitions.whitehouse.gov/…/stop-construction-dakota…

3. Donate to support the Standing Rock Sioux at http://standingrock.org/…/standing-rock-sioux-tribe–dakot…/

10. Call the executives of the companies that are building the pipeline: