The young man had committed no crime, but they came to arrest him anyways.  They came afraid, under cover of darkness with weapons drawn, though he had made no threats and shown no indication of violence.  They insulted him and beat him as he awaited trial.  No evidence was brought against him that supported his conviction, and yet he was convicted.  They abused him, tortured him, and executed him.

Jesus, too, was a victim of police brutality.

I have found myself reflecting on the story of Jesus’ arrest and crucifixion a great deal this week, as once again the headlines are consumed with stories of racism, violence, and injustice.  In particular, I find myself thinking of the weeping women.  I am a white woman; I am a witness to the brutality of racism rather than its victim, and the more I learn, the more I weep.  Jesus told the women who wept for him,

“Daughters of Jerusalem, do not weep for me, but weep for yourselves and for your children. 29 For the days are surely coming when they will say, ‘Blessed are the barren, and the wombs that never bore, and the breasts that never nursed.’ 30 Then they will begin to say to the mountains, ‘Fall on us’; and to the hills, ‘Cover us.’ 31 For if they do this when the wood is green, what will happen when it is dry?” (Luke 23:28-31)

Green wood is young wood, new wood.  Dry wood is old, matured wood.  If Jesus was met with crucifixion 2000 years ago, what happens today? Today our societal sin is more insidious.  We no longer make a public spectacle of our brutality, as the Romans did with crucifixions.  Instead, we try to hide it.  In fact, we have spent so many generations becoming experts at hiding it that some no longer believe it exists.  In order to see the ways we crucify our brethren today, those of us raised in privilege must unlearn so much.  For every victim of obvious brutality, like Freddie Gray, there are thousands of victims of more invisible injustices, too numerous to list.  And even still, our sin has gained so much of the familiarity that comes with age that even the obvious brutality is often denied.

Somewhere in the middle of February, Lent began.  I don’t know when, exactly; I’d have to look it up.  Ash Wednesday passed me by barely noticed; I felt like Lent had already begun.  My Mardi Gras was the last weekend of January, when I went to my art studio and painted two full days in a row, a luxury I have not had in two years.  It was a time to celebrate: my studio is a cooperative one with many artists, and we had found a new space just in the nick of time before our old lease ended. 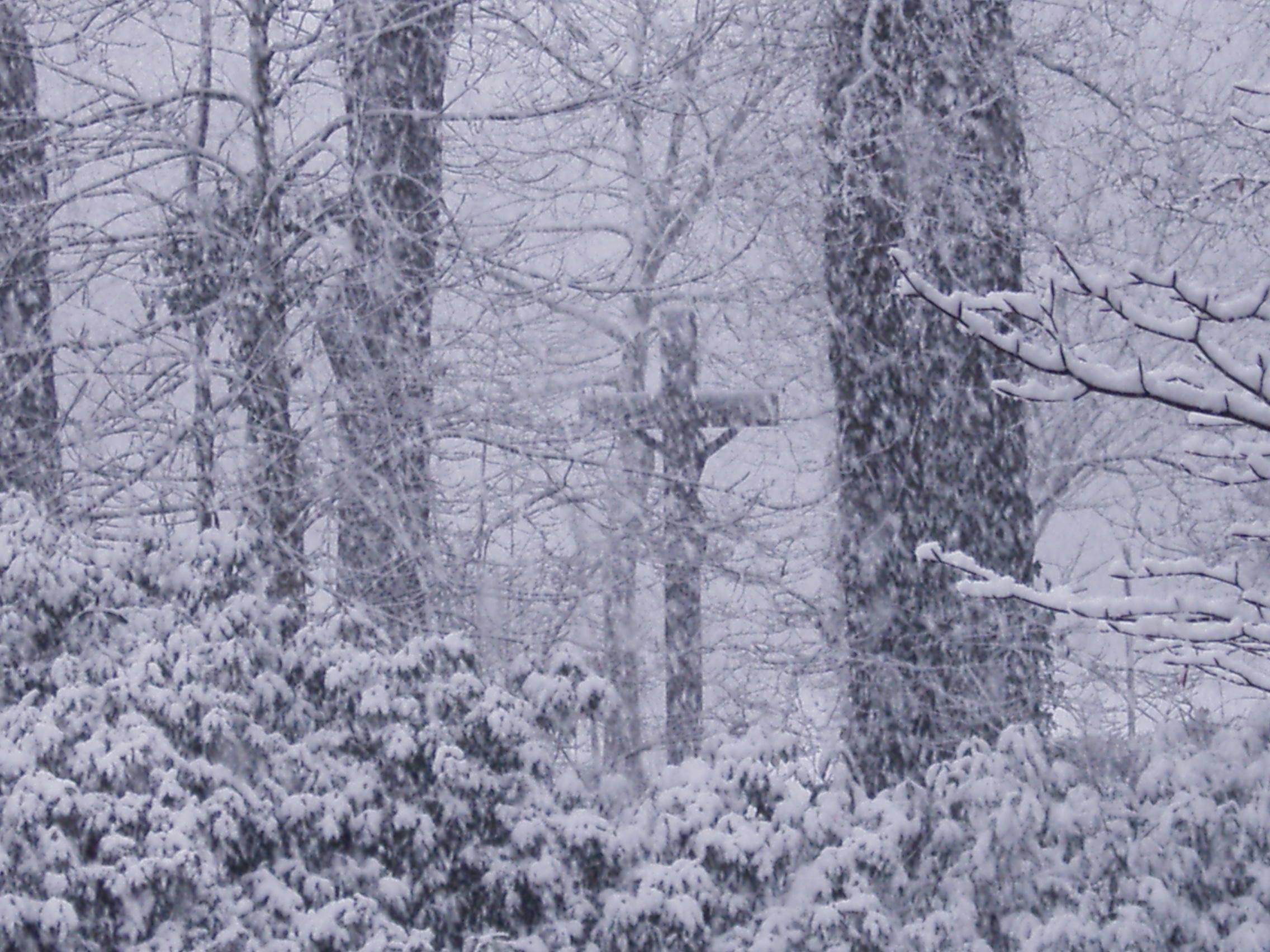 I live in Massachusetts.  We had the snowiest winter on record compressed into a 6 week span.  I stopped checking the weather; I just assumed it would snow every third day.  Watch snow.  Wait for plows. Buy groceries. Watch snow. Wait for plows. Buy groceries.  Repeat. Repeat.  When the schools are canceled, most of the playgroups are too.  I am home with a one-and-a-half year old.  At least he loves watching the plows.

It snowed almost every Sunday.  Church was cancelled two weeks in a row; most of the other weeks we were still waiting for the plows to get to us, or the roads were too bad to drive.  I find God many places, but the liturgy and the Eucharist are my grounding place.  “Source and summit” the Church says of the Eucharist; I have never felt this truth so keenly. I wasn’t able to make it to Mass for a month.  I don’t know if I’ve ever gone that long without it before.

Isolated, but not completely: the calls can still come through.  Friends in crisis.  A sister in the hospital. I watched the snow and waited and worried.

The snow is melting now.  I’ve been to church three weeks in a row.  My loved ones are healing.  We are getting out; the isolation is lifted.  I am coming out of the fog.  I pray now and I feel rusty, unsure.  Six rough weeks: is that all it takes for me to lose touch with God? I feel as though I forgot how to pray, forgot how to serve, forgot how to be Church, forgot how to do anything but go through the daily motions of physically living.  Yet I am grateful, because as the fog lifts, I see God, still right there as always, saying, “I still love you.”

Lent may not be officially over yet, but I’m ready for Easter.

Author’s Note: A copy of this letter is being mailed to the Vatican; I plan to post any response I receive.

Last month, you called Catholics to “responsible parenthood,” reminding us that we need not breed “like rabbits” in order to be good Catholics. I am a young Catholic woman, married and raising a child. I was glad to hear the Church acknowledge that humans can – and must – enter parenthood with great intention and care!  This gift of forethought is what sets humans apart from animals. A rabbit in the woods does not stop to consider when might be the best time to have a litter of kits, or whether there might be adequate food and shelter for them when they arrive; the rabbit’s body simply knows that it is breeding season, and breeds. Humans have the capacity to consider our decisions, using our reason and conscience, and we have a responsibility to do so.  We are called to be fruitful and multiply, not simply to multiply!

You followed this call to responsible parenthood by affirming the Church’s teaching that Catholic couples should only use “natural” methods of family planning. At this I was dismayed, because these methods do not work for all women. I would know; I am one of them. There are a range of “natural” family planning methods, and I researched them all, in search of one that would suit my body. Unfortunately, I learned that none would work. I’d like to share what I learned with you, Pope Francis, because I know that I am not the only Catholic woman who faces this challenge. END_OF_DOCUMENT_TOKEN_TO_BE_REPLACED

This is how the birth of Jesus Christ came about. When his mother Mary was betrothed to Joseph, but before they lived together, she was found with child through the Holy Spirit. Joseph her husband, since he was a righteous man, yet unwilling to expose her to shame, decided to divorce her quietly. Such was his intention when, behold, the angel of the Lord appeared to him in a dream and said, “Joseph, son of David, do not be afraid to take Mary your wife into your home. For it is through the Holy Spirit that this child has been conceived in her. She will bear a son and you are to name him Jesus, because he will save his people from their sins.” All this took place to fulfill what the Lord had said through the prophet: Behold, the virgin shall conceive and bear a son, and they shall name him Emmanuel, which means “God is with us.” When Joseph awoke, he did as the angel of the Lord had commanded him and took his wife into his home.  – Mt. 1:18-24

“This is how the birth of Jesus Christ came about.”  This isn’t the story we usually think of first when asked about the birth of Jesus.  Usually, what comes to mind is Mary and the angel, the stable and the manger, the shepherds and the kings. Think of the creche: in every one I’ve ever seen, Joseph has stood or knelt passively to the side or behind Mary and the baby Jesus.  At his most active, he is shown simply placing a protective arm around his family.  He is a silent witness.  Mary gives birth, the angels sing praises, the shepherdsm    do homage, the kings bring gifts.  But Joseph doesn’t get a verb; he is simply there.  And so it is easy to forget that were it not for Joseph’s conscience, Jesus would never have been born at all. Our faith, our Church, owes its existence to Joseph’s act of conscience.

Mary was pregnant.  Joseph knew he could not be the father.  The obvious conclusion would have been that Mary had committed adultery. We’ve seen in other parts of scripture what happened to women caught in adultery: they were stoned to death.  This was the punishment prescribed by Joseph’s religion.  It was what the religious leaders of his time would likely have called for.  But Joseph made a choice to follow his conscience rather than the rules.  First he thought he would simply divorce her.  Without a husband or father to support her, and with a baby on the way, Mary would have been in a very difficult position.  And so Joseph listened to the voice of God that told him, “Do not be afraid.”

Did the religious leaders know that Joseph was not Jesus’ father? What would they have said to Joseph if they did? Might they have scolded him for accepting Mary? Would they have called him righteous, or might they have called him disobedient, or uppity, or a bad Jew? How did Joseph’s family and friends treat him?  Did he tell them the truth: that he was not the father of the baby, but that he knew in his heart that casting Mary out was wrong? Or did he keep that part of himself hidden?  Many of us choose to follow our own consciences rather than the dictums of our religious leaders – and must deal with the consequences that can sometimes come from that.  When we do, we’re in good company.

You might have noticed the new banner at the top of the page here – Call to Action has a new look, and we’re stoked about it! Check out the video to hear more about it!

You hopefully have noticed our new blog design!  The CTA 20/30 Online Committee is working on expanding this blog, and this is just the first step!

You may notice the second menu bar up top that right now just says “Uncategorized” – this is a new feature that we’re implementing: categories.  Right now, there’s nothing in those categories since we still need to file our posts, but once they’re filed, you’ll start seeing some subject-specific categories listed on the toolbar.  You can click any category to read just posts in that category.

Keep an eye out over the coming months – we plan to roll out more additions to this blog as well.  This is just the beginning!

Join the movement of Catholics in their 20s and 30s who seek justice in the church and world. Learn more about CTA 20/30 by visiting http://cta-usa.org/cta2030/, where you can find out about ways to join the community and sign up to receive email updates from 20/30.